Monsanto, the U.S. corporation that everyone loves to hate, is the target of Neil Young, one of the top composers of protest music of his generation.

“‘Rock Starbucks’ is reportedly set to be included on Young’s next album, a concept album called ‘The Monsanto Years’. Young is reportedly making the album with Willie Nelson’s sons Lukas and Micah, with whom he played a surprise show in San Luis Obispo, California earlier this year.” [1]

In this particular musical initiative, Neil is taking on Starbucks, another company people are slowly coming to dislike, especially because of their puzzling potential involvement with Monsanto. Why would anyone ever buy outrageously overpriced coffee beverages from a business that tried to force race relation talks on their customers?

“The track criticises the coffee company for its alleged involvement with agrochemical company Monsanto and its use of genetically modified organisms (GMOs), and isn’t the first public statement Young has made against Starbucks, after he called for fans to boycott the store in 2014.” [1] 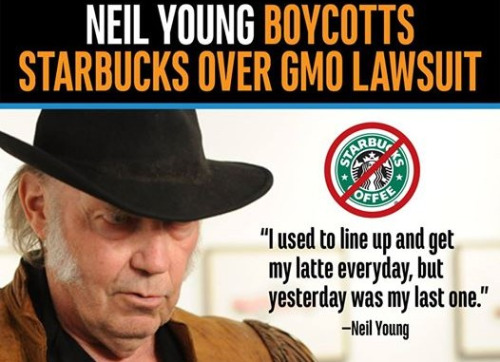 Truly, one of the best ways to protest a particular product or company is to not buy it and avoid it every way possible. Another way is to compel pension plans, mutual funds, and insurance companies to consider the divestment of stocks in companies like Monsanto or Starbucks. The power of the consumer is much greater than most are aware of. Truth be told, it is the purchasing power of the farmers of the world that can bring companies like Monsanto to its knees.

Just how the world community of nations used an economic boycott against apartheid South Africa, a similar international initiative directed at Monsanto can produce similar results. DIY stores, communities, and even nations the world over are already banning Monsanto’s GMOs, seedless seeds, and glyphosate-containing Roundup. Some countries are even passing legislation that is indirectly aimed at curbing the influence that Monsanto has in their agricultural sectors.

As Neil Young’s new album begins to circulate, awareness will be raised around the toxic products produced by Monsanto. It will also get many people thinking about why Starbucks would even want to be associated with such a corporate menace to society, if that is the case.

“The record, which features protest songs against controversial agricultural company Monsanto, will be released on June 16.” [1]

When famous rock stars start singing against rogue corporations like Monsanto, you know the world has changed. When they write songs that trumpet their boycott of their favorite coffee shop, the necessary sea change in awareness may be just around the corner.

“In the tune ‘A Rock Star Bucks A Coffee Shop,’ Young rips into Starbucks for its alleged support of genetically modified organisms, a.k.a. GMOs.